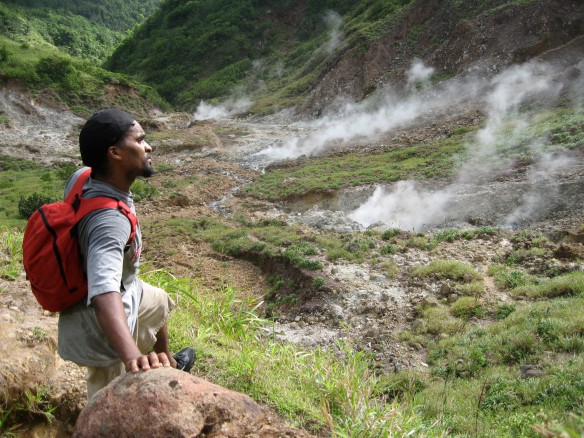 “You see the spot where the cloud hangs low on the mountain.”  Lambert points across the valley from the porch of his small cinderblock house up a trail at the top of the village of Trafalger.   “In it you will be.”  He pauses,  “A mystic view, mon… Mystic view.”  We linger there as he smiles, repeating those two words, “mystic view.”

Lambert is gazing towards the cloud that hangs over the boiling lake in Dominica’s Morne Trois Pitons National Park – a UNESCO World Heritage Site.  The lake is actually a flooded fumarole and is the second largest hot water spring in the world after Frying Pan Lake on New Zealand’s North Island.  Although Frying Pan Lake can be reached on a short walk, Dominica’s Boiling Lake will take the better part of a day.

I’ve come to enlist Lambert’s help as a guide on the trail, a recommendation from a good friend who recently moved to this rugged, mountainous Eastern Caribbean Nation.  After Lambert, a short, kind, man who exudes positive energy, takes me on a tour of his garden full of dasheen, bananas, green grapefruit and papayas, I leave with plenty of fruit as a gift for my visit, but no guide.  Lambert has to work for the electric company tomorrow, but he assures me he will find the right guy for me as he sets out into the village.

About an hour later, Lambert returns.  He takes me to Ivo’s, a local bar where on a Sunday evening, the men are pouring out into the street with their bush rum.  Behind the bar I am introduced to Wendal, the serious looking bartender with short black dreads who, according to Lambert, is “not crazy like these other guys.  He’s got a good head, positive thinking.  He’s your guy.”  We negotiate a reasonable price and meeting place and I leave with Lambert back into the village street.  The setting sun paints a vibrant picture as Lambert gazes up and says, “Look at that sky…  a very good sign.  The weather will be perfect for you tomorrow.”  And it was.

At 6:00 am, with no cloud in the sky, I meet Wendal and we catch a bus up to Laudat (pronounced Lo-Dah), a scenic mountain village that is the home base for accessing many of Dominica’s natural treasures.  At an elevation of almost 2,000 feet, Laudat is often draped in its own cloud cover as the dramatic peaks of Dominica’s interior catch every incoming system off the Atlantic.  We walk through the streets in a crowd of schoolchildren until we make our way down the dirt road, past the hydroelectric plant, and across the river to Ti Tou Gorge, the starting point of the trail and a spot that I will thank the heavens for when the hike is over.

With over 1,000 flowering plant species, walking through the Dominican rainforest is like walking through the Garden of Eden.  The first part of our journey is the wettest, as we walk through dense, textured greenery, a series of flowers, ferns, and vines fighting for their space amidst imposing gommier trees reaching high into the tropic sky.  The land is so pristine and perfect one would swear it was the design of a master landscaper.  This forest houses many species of birds including two endangered parrots, who are singing their morning anthems as we pass through their home.

The nice thing about walking through the jungle in Dominica is that there are no large animals to fret over.  The largest animal I see besides the goats tied to poles in Laudat is the Dominican Agouti, a rodent that Wendal informs me is a delicacy in this nation.

At the outset, I am a bit antsy about our trek.  I have read from various sources that this is the “toughest hike in the Caribbean” and that it is a 6-hour minimum, guide-necessary ordeal.  There is an I survived the boiling lake website, there are t-shirts made, there is an online guestbook to talk about the journey; the online community has really hyped this one up for me.  Not normally one to opt for a guide, I jumped out of my computer chair to find Lambert.

Here Wendal and I are finally on the trail and I’m thinking, “hey, its not so bad,” and I say so.  He laughs, reminding me that we have only been walking for a half hour.

About 45 minutes in, we come to our first landmark, “Breakfast River.”  Naturally, we sit down for breakfast.  Wendal has brought some fresh bananas, so we balance on rocks by the river eating the bananas one by one until they are gone.  We refill our water bottles with fresh Dominican spring water and cross the river on our way up, up, up in the steepest part of the journey to the trail’s peak on top of Morne Nicholls.  We have left the wet, lush greenery of the inner rainforest, moving towards a dryer, more arid landscape.  From the peak we can see both the Atlantic and Caribbean.  Nestled in the hills that do not roll but rather bunch and gnarl like unkempt hair, Laudat seems strikingly far away.  We have made it to the highest point on the trail, but this trail is not about reaching a summit.

Wendal and I wind our way through a path latticed with wooden logs towards the billowing smoke signaling our entrance into the Valley of Desolation.  The sweet, slightly pungent smell of sulfur is in the air as we enter the ghoulish scene.  The valley stands in stark contrast to the lush forest of the trail’s start.  Here, a black and a white stream of boiling hot water wind down the ravine like a strand of DNA, giving birth to plumes of grey steam.  Wendal leads me over to a particularly virulent pool of murky water for a steam bath and then hands me a pasty grey substance from nearby that I am instructed to put on my face as a mud mask.  With my war paint on, I am ready to face the boiling lake, beckoning on the horizon.

We follow a stream of warm, milky blue water as it cascades down garish red and orange rock ledges into vine-covered pools below.  The whole sight is otherworldly.  It’s hard to believe that such unnatural colors are the product of one of the earth’s most natural processes – plate tectonics.

Hiking uphill again, we pass through a smaller, similarly desolate and smoky valley towards the cloud-covered peak ahead.  The path gets slightly confusing but we can see the end in sight, so we press on knowing we are headed in the right direction.

As we crest the final peak and enter the hot, sulfuric cloud I hear a slight rumbling below.  Carefully, I walk to the ledge and peer down.  Through the clouds I can make out pale, sky blue water violently bubbling below.  We have made it to the famed Boiling Lake… and it’s boiling!

As recently as 2005, bewildered adventurers have encountered an almost bone dry, tepid puddle after three hours of arduous hiking.  In fact, there is an archive photo of two visitors standing in the center of the dry Boiling Lake in 1887 and in 1900 an English visitor and one of his two guides lost their lives upon encountering the barren lake when a thick sulfurous gas was emitted from the empty crater.

Alas, in October of 2009, the lake is as active as ever, covering Wendal and I in its thick steam and daring us to get too close.  We cautiously hike down the cliff ledge to the lake’s edge to look the beast in the eye.  Lost in the haze we take time to absorb the raw power of this awing spot on this volcanic island of wonder.

On the way back, which is relentlessly uphill at the start, Wendal begins to tire.  When I jokingly harass him about his fatigue, he assures me he is going to start exercising regularly and tells me I should have warned him that I was an avid hiker.  To prove his strength he offers,  “let’s sprint the whole way back once we get to the peak, get some good exercise.”  While I would not recommend this, I go along with the plan to appease him and we jog the mostly downhill trek from Morne Nichols to Breakfast River.

We slow our pace for the last leg from Breakfast River back to Ti Tou Gorge, mostly because my left shoe is barely hanging on after the beating it has taken. When I hear the rushing water below, I know we have successfully completed the hike.  Tearing off my clothes, I jump into the cold pool that serves as an entrance to the gorge.  Swimming in the crystal clear water through the dark, narrow passageway between the high cliffs that I just traversed, I make it to the rushing waterfall at the end.  Sitting on a rock by the fall, endorphins in full force, I am elated.  I have hiked through the rainforest, crossed a river, climbed over a volcanic peak, received a mud mask by a black stream, took a steam bath by a boiling lake, swam through a gorge, and relaxed by a waterfall.  There are not many places on Earth where you can witness and experience so many things in one walking day.  This is the unmatched beauty of Dominica.

“Mystic” can be described as inspiring a sense of mystery and wonder, or having an import not apparent to the senses, nor obvious to the intelligence.  It is beyond ordinary.  In that sense I did not have one, but many mystic views.  It was a mystic day of beauty that defies description, intrigue that baffles the best of scientists, and unending enchantment.  Dominica’s Morne Trois Pitons National Park is truly a special slice of heaven.

The next afternoon, I go back up the trail at the top of the village of Trafalger to thank Lambert for making this incredible adventure possible.  He is not there.  I stand in his fragrant hilltop garden gazing back across the valley to catch one last glimpse of the cloud-covered peak whose mystery is only slightly more apparent to me now.

“Mystic View.” The words pour out of my mouth and I linger there with a knowing smile as the sun sets on another day.